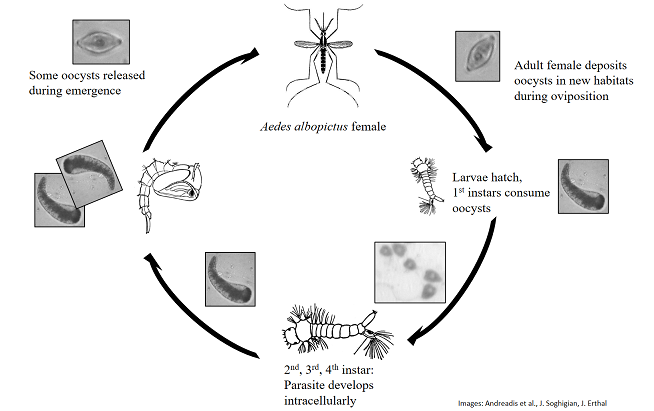 I’ve recently had another paper from my PhD on Ascogregarina published1, where Todd Livdahl and I show that dispersal strategy of the parasite varies depending on sex of host and conspecific density of parasites. The parasite is able to place a larger proporton of infectious material, called oocysts, into adult females, rather than shedding them back into the larval habitat upon emergence with pupal exuviae. This makes sense, as females may one day visit a new larval habitat to oviposit, potentially dispersing the parasite. On the other hand, at low doses, male mosquitoes tend to release more infectious material back into the larval habitat when emerging. But at very high doses of the parasite, this proportion changes in parasites infecting male mosquitoes and a larger proportion of parasites are found in the adult male. This isn’t related to body size differences or time to emergence, either. This is particularly odd because we do not think adult males would ever return to a larval habitat, but this hasn’t been tested with parasitized mosquitoes. None the less, the difference between parasite investment in adult males and females at natural exposure levels of the parasite is strong. Ascogregarina thus show a remarkable adaptation to host, to the point of responding to host sex. Cool!

Ascogregarina were the primary focus of my PhD, where I worked with Dr. Todd Livdahl to build a research program around the aseptic parasites of mosquitoes. Ascogregarina are gregarine parasites that infect mosquitoes when filter feeding larvae ingest oocysts - a schematic of the life cycle is shown above, with mosquito images borrowed from Andreadis et al.’s Identification Guide to the Mosquitoes of Connecticut. The parasite then infects gut epithelial cells, developing intracellularly until (at least in A. taiwanensis), host molting hormones are released, at which point the parasites migrate to Malpighian tubules. There the parasites reproduce via syzygy, producing oocysts. When mosquitoes emerge, some oocysts are carried with the adult, while others are released into the larval habitat.

Ascogregarina infect some container dwelling mosquitoes, with most described species infecting container dwelling Aedes mosquitoes. Whether Ascogregarina are exclusive to container mosquitoes or not is unknown, although the fact there have been no described or reported gregarines naturally infecting ground pool mosquitoes suggests that might be the case. Ascogregarina make particularly good models in disease ecology, as they complete their life cycles entirely within the aquatic phase of their mosquito host, exposure can be quantifiably controlled based on the number of oocysts added to a microcosm, and fitness of both host and parasite can be measured relatively easily. Morevoer, Ascogregarina are ubiqitous in the field, frequently found with the mosquito species on which they specialize.

Michelle Tseng recently published 2 some very cool work showing that populations of Aedes albopictus and As. taiwanensis show evidence of host/parasite adaptation. These results, along with general observations on host specifity in gregarines and my own results lend strong support to the idea that Ascogregarina and the Aedes mosquitoes they infect are well adapted host-parasite systems.