I have recently joined Brian Wiegmann and Michael Reiskind at NC State University as a postdoc to work on our recently funded NSF project reconstructing the evolutionary history of mosquitoes, titled Phylogenomics to advance understanding of world mosquito diversity and vector ecology. We will be utilizing anchor hybrid enrichment 1, a form of exon capture, to reconstruct phylogenetic relationships among the Culicidae, ideally down to the species level, such that we can evaluate hypotheses related to biogeography, host preference, ecological specializations, and perhaps even provide insight into vector competency. 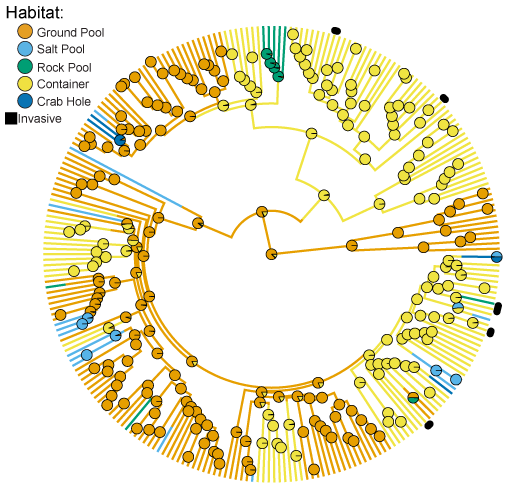 projects at the Connecticut Agricultural Experiment Station. At CAES, I reconstructed the phylogeny of 260 aedine mosquitoes, a group which includes the world’s deadly and invasive Aedes disease vectors. The invasive mosquitoes in this group are notable for their affinity to a wide range of natural and artificial ‘container’ habitats for their immature stages - from water filled plant-parts to tires. As the eggs of these mosquitoes are often dessication resistant, their eggs can remain in tires, bromeliads, or water barrels being transported quite easily. This has allowed these mosquitoes to hijackg human trade routes, likely since as early as the slave trade in the case of Aedes aegypti. In this way, Aedes mosquitoes have hitchhiked around the globe. We recovered two primary clades containing Aedes mosquitoes (with each of these clades containing non-Aedes mosquitoes). We found that the utilization of container habitats had convergently evolved in multiple lineages of Aedes mosquitoes, and simulations under different evolutionary models suggest that morphological similarity among lineages may be due to selection acting on habitat preference 2.

Understanding the evolution of ecological specializations in mosquitoes is an important goal of the NSF-funded project at NC State, and our efforts will tackle not only habitat specializations, but also preferences in blood hosts and how diversification rates in mosquitoes have changed over the >100 million year history of the family. Uniquely, this project aims to build a species-level molecular phylogeny for mosquitoes - something that, surprising to some, has not been attempted. The evolutionary relationships among mosquitoes are often contentious, with two major groups (Aedes and Anopheles) receiving significant nomenclature adjustments. Although scientists frequently quarrel over names, in this case the groups being changed are the target of worldwide control efforts and public education campaigns, and so any nomenclature changes can cause serious disruptions in communicating science to the public. Beyond that, understanding how mosquitoes are related could be helpful in evaluating vector competency or directing control efforts.

A ‘mosquito tree of life’ is has been something I have been working towards for years, and I am incredibly happy we’re finally getting a chance to make it happen.